Wouldn’t it be cool to build a massive shield that you can hide behind while you fire shots at your enemy, while not getting hit at all? In fact, in a lot of games (and different sports) played by strong players, they would also apply the same technique. Throwing jabs and punches out there at your opponent while you’re in a safe position from having the same being done to you.

The stonewall is a home for the disciplined, the player that heavily relies on excellent endgame and middlegame technique, while skipping past the opening phase as early as possible. It guarantees to drag most games to as late as possible. However this is not without a cost. Let us examine the pawn structure of the Stonewall (If you find this part boring, you can simply skip it to the games. Especially if you’re a kid.): 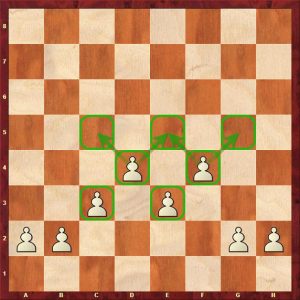 The two center pawns, f4 and d4 are supported by the pawns behind it, c3 and e3, which offers secure protection from incoming attack. We also control the square e5 very well, since it is supported two pawns, while also controlling the squares on c5 and g5 too. Now for the downside of this structure: 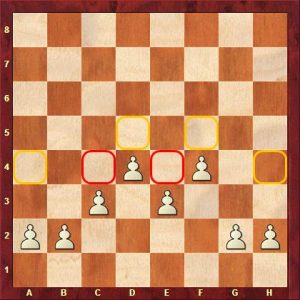 The squares on e4 and c4 (particularly the e4 square) are considered weak in this structure, black may use the square on e4 as an outpost and the square on c4. In the endgame, white may also find it difficult to deal with incoming pieces placed on squares like h4 and a4, especially with knights. Of course, these squares are normally not accessible in the opening to middlegame phase. the squares on d5 and f5 are usually occupied with either pawns or pieces. If black has not commited d7-d5, he may choose to go for a central pawn break with d6 and e5 against white’s centre. This is an important idea to be aware of.

Now that we have these things in mind, we realise that white actually gets weaker in the endgame, given that enemy knights are still on the board and that the weaker central light squares may become occupied by enemy pieces. Let’s move on to the games. The first game we will look at, comes from Botvinnik, playing the Stonewall formation on the black side.